I have imported several power supplies from China, and begged suppliers not to send the unfused chinese 3 pin plugs leads to me. I requested they instead keep the leads to save the shipping weight. I have tried to explain to several suppliers that unfused plugs are not safe on UK electrical systems, and please stop sending them.

Despite my protestations, I keep receiving dangerous leads from these suppliers, which I need to then destroy.

Why are these unfused plugs unsafe?

Our UK house sockets are fused at 30 or 45 amp. The wires I have seen attached to these plugs are rated at around 1.5 to 2 amp. If a fault develops in the power unit or in the wire, the wire can easily overheat, burn leading to bare cables, exposed wires, house fire. A 2 or 3 amp fuse in the plug is therefore a necessary safety measure.

It is possible that sockets in China have a much lower power rating than in the United Kingdom, so may be safe in China, but unsafe in the UK.

What should I do if I receive such a product?

If you are importing goods from China, and like me are having trouble comunicating the fact you don’t want unfused dangerous plugs, try sending the following graphic I made, to your supplier. It seems to work better than words.

I sent orders and money to Davis Micro/ aHappydeal.com / Everbuying.com . Hoping to do business with them, but now having learned that is impossible. They typically take 5 weeks to deliver orders paid by Telegraphic Transfer, and that is with chasing them up almost every day. I don't know if that is because without payment protection of Paypal, they use the opportunity to sit on your money, but in any case, seems very poor business to me.

Don't be surprised if they give you a tracking number for a package, which then makes it's way back to their warehouse. It is a way of fobbing you off if you are demanding a refund. The package contains nothing, goes to Chinese customs then back again. Depending on how vigilant you are, it might buy them a week or two. This has happened to me on both telgraphic transfer orders when I began to demand a refund. They will literally stop at nothing to sit on your money for as long as possible without actually shipping! Don't be surprised if they blame the package coming back to them on a Chinese holiday or some other similarly lame excuse. This happened to me. You might find all this unbelieveable, so do a track and trace on EE952747654CN and EE960525645CN . These are both tracking numbers given to my by ahappydeal, for both T/T orders, and both go back to ahappydeal. You can track EMS packages from china using http://www.ems.com.cn/english.html

Doing business with ahappydeal.com is like wrestling in a tar pit.

It is evident that this company routinely sends out travel adapters along with American chargers. Even if you don't use 110v American power. (The chargers might work for a while on 230v). Even if you protest strongly, they simply ignore your calls for safe mains chargers. I resorted to sending a picture which illustrates the dangers of the kit they send out. The picture is actually of a perilous travel adapter plus American copy iphone charger they send to UK customers. (The charger and travel adapter pictured actually came from ahappydeal.com after I told them they are dangerous, and specifically told them not to send travel adapter and American chargers) This also illustrates one of the many ways their kit can electrocute an unsuspecting customer. I sent them this picture on 24th September 2013. I would like to hear if anyone else gets such dangerous kit from these clowns now that they can't argue that they don't know. I also recommend you send the following picture to any other company which apparently has no consideration for the safety of their customers. It doesn't seem to me that it would be difficult for them to supply safe chargers, given that much of China, the whole of Hong Kong and Singapore use the same mains outlets as we use in the UK.

The Chinese caption below should interpret as Perilous Live (as in charged electric). Most people would probably survive the electric shock from this set-up, but if the appliance were more powerful, it is certaily likely such a shock would be lethal. I recommend that those travel adapters as pictured are always avoided as they omit basic safety features. Customs should perhaps refuse admission of such travel adapters to the UK.

It is easy to plug the earth pin into these travel adapters. Something a child would easily experiment and do, without knowledge of the dire concequences: 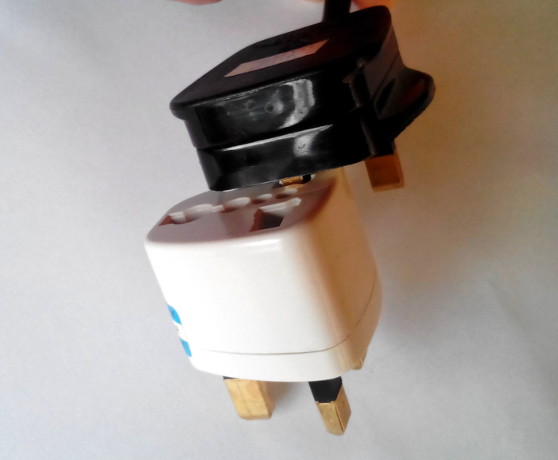 The concequence is exposed mains live metal. One hand on earthed cooker for example, one hand on kettle would easily cause death.

Apparently, they are not for use in China, but are regularly exported to UK. Do the manufacturers know how dangerous they are so they are banned in China?

<<Back to Nick’s home page